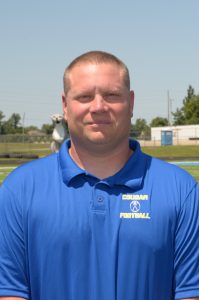 Coach Travis Nolting is entering his first season as the Head Football Coach of the Greenfield Central Cougars.  Coach Nolting is a 2000 graduate of South Decatur High School.  He earned his bachelors degree from Anderson University in 2005 where he was a member of the Football and Track and Field teams.  He earned his Masters Degree in school administration from Oakland City University in 2015.

Prior to coming to Greenfield Central Coach Nolting was the Head Football Coach of the North Central Thunderbirds in Farmersburg, Indiana.

During his time at NC Farmersburg, Coach Nolting led the Thunderbirds to unprecedented success.  Under Coach Nolting’s eight seasons as the Head Coach theThunderbirds produced a 60-28 win/loss record, produced numerous All Conference and All State Players, two Mr. Football Candidates (Chase VanSchoyck 2013) and (Dawson Basinger 2018) and won conference titles in 2013 and 2018.  The Thunderbirds also became the first team in Sullivan County history to win a football sectional winning the Sectional 48 class 1A championship in 2018.